With advancement in hardware implementation orthogonal frequency (OFDM) was possible to deploy in recent fourth generation (4G) technology. There are several benefits of OFDM in compare to its rival multiple access techniques but there are some critical issues for implementing it in next gen wireless communication system. In 5G, 3GPP has goal to providing services like enhanced mobile broadband (eMBB) machine type communication (mMTC) and ultra reliable low latency communication (uRLLC) Here comes NOMA in picture for future communication technology. Existing LTE system suffers almost 10ms of latency while using OFDM but it should be nearby 1ms for uRLLC services, which almost ten times lesser than earlier one, as musch as reliability concern it should be above 99.999%. Another challenging scenario is eMMB services, which supports almost 100MBPS of data and should be 3 times more spectrum efficient than existing one. This are some limitation of orthogonal multiple access techniques.

Start of the art technology NOMA is a power domain multiple access technique. NOMA uses different power level for different user, so entire bandwidth can be exploited by the user hence enhances spectral efficiency of a telecom network. NOMA implementation supports mMTC and urLLC services as it supports connections increased by 5 and 9 times respectively [18]. Also it is 30% more spectral efficient in downlink and 100% for uplink enhanced mobile broadband services. Heterogeneous network can also takes benefits of NOMA, as more number of users is supported by this principle in small cell. These all advantages make it a strong candidate for future wireless communication techniques.

In power-domain multiplexing, various clients are dispensed distinctive power coefficients as indicated by their channel conditions so as to accomplish a high network efficiency. Specifically, various clients data are superimposed at the transmitter side. At the user side successive interference cancellation (SIC) is performed for deciphering the data individually until the ideal client’s sign is received. The performance gain of NOMA compared to that of OFDMA increases when the difference in channel gain the path loss between UEs is large. 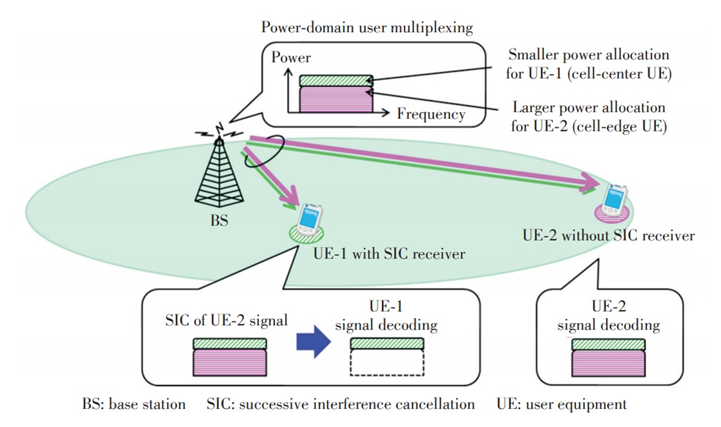 3GPP release 13 introduced NOMA as new study item (SI) “downlink multi-user superposition transmission (MUST)”. Later in release 14 a work item (WI) was introduced to for the basic mechanism to enable LTE to support “Intra-cell MUST”.

NOMA provides several advantages in compare to existing orthogonal multiple access techniques. There are, however still some bottlenecks in NOMA system implementation. NOMA requires more complex SIC algorithms as number of user increases in the telecom network. So, in compare to orthogonal techniques it requires more complexity on hardware side. Base station transmits the signal in overlapping manner to all the users, that’s why it needed optimal power allocation techniques otherwise it suffers heavily from interference. It becomes more complex when user is continuously in moving state because channel estimation required for optimal allocation of power for a particular user. Signaling overhead also a prime issue while implementing NOMA. When a user connects to NOMA system, power allocation are conducted on each subband. So as  the number of user increases in the entire system signaling overhead also increases linearly. Error Propagation in SIC Implementation also a point of concern for NOMA implementation.

In recent advancement 3GPP names ZTE executive as vice chairman of its RAN2 committee. In addition to holding the two vice chairmanships within the RAN2 and RAN3 group’s, ZTE is also heavily involved in driving technical standards relating to NOMA.