AR VR everywhere, but not a clear winner…..

BlogAR VR everywhere, but not a clear winner…..

AR VR everywhere, but not a clear winner…..

Another fast paced week for the AR/VR segment as most of the tech giants are trying to gain a strong foot in this market. Let’s look at some of the buzz:
These tech companies have been exploring the improvements in AR/VR technologies for quite some time and it seems to be gaining traction.

Let’s look at the market trends in the AR and VR space: 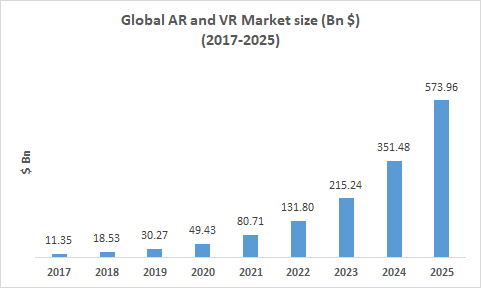 That being said about the active market of AR/VR let’s peek into the trends in patenting AR/VR technologies. The graphs below have been generated using the Dolcera PCS tool.

The graph below shows the top ten jurisdictions for VR and AR patent filings. The US accounts for ~32% of the global IP filings and is at the top place followed by China.

The major players are all big tech companies like Microsoft, Sony, Alphabet, Facebook etc. who have been actively filing IP in this segment. A 10 year old startup MagicLeap is amongst the top five spots with its vigorous filings in the last three years.

Let’s look at the corporate owner trend based on publication year to get a sense of YoY comparison of their filings:

According to the graph above, most of the top corporate owners have had a majority of their IP filings in the last two years.

Some of the key areas being researched include eye tracking, haptics etc.

Some of the players that seem to have gained some interested in the domain in the recent 5 years is as follows:

From the above IP research insights it is clear that the domain is anticipated to have more filings going forward which will be enabled by 5G. Why?
Mobility hindrance due to the current VR devices, battery drain and even sickness caused by VR has been the weakness of this segment but, the adoption of 5G is believed to solve these problems with its fast, stable and high-bandwidth network. The applications of AR/VR will not be limited to only games like Pokemon Go but, will also be applicable to areas like retail, social networking, travel, media and healthcare as well.

With the AR/VR industry still in the early stages, there will be many opportunities for innovative tech startups to get their foot in the door. If you are one and would like to know more about the space and opportunities contact us.