With the impactful increase in the number of use cases, the Internet of Things (IoT) dominantly integrates ambient sensing, ubiquitous communication, intelligent analytics, and persuasive communications. A recent survey concludes for an estimate of about 50 million devices to operate by 2020 that will generate an avalanche of traffic. IoT is a relatively newer concept is not included in most of the existing standards technically. In today’s scenario, with a large number of vendors trying to supersede the field most of them are creating and deploying their own proprietary standards. These organizations are working hard not only for standardizing the hardware components but also the software services which makes communication between multiple IoT devices difficult. For easy mitigation across the different systems, the entrepreneurs are trying hard to maintain uniformity among different standards. The use of standards –

Standardization is not basically to solve the problem for interoperability because this can be achieved through multiprotocol gateways. IoT landscape standardization is important to reduce the gaps between protocols and thus reducing overall cost. Though there is no single body which is responsible for making standards, there are considerable efforts at the national, international and organizational level. Alliances have been formed by many domestic and multinational companies to come up with a common platform to work on. The timeline below shows a brief view of the development of IoT standards. 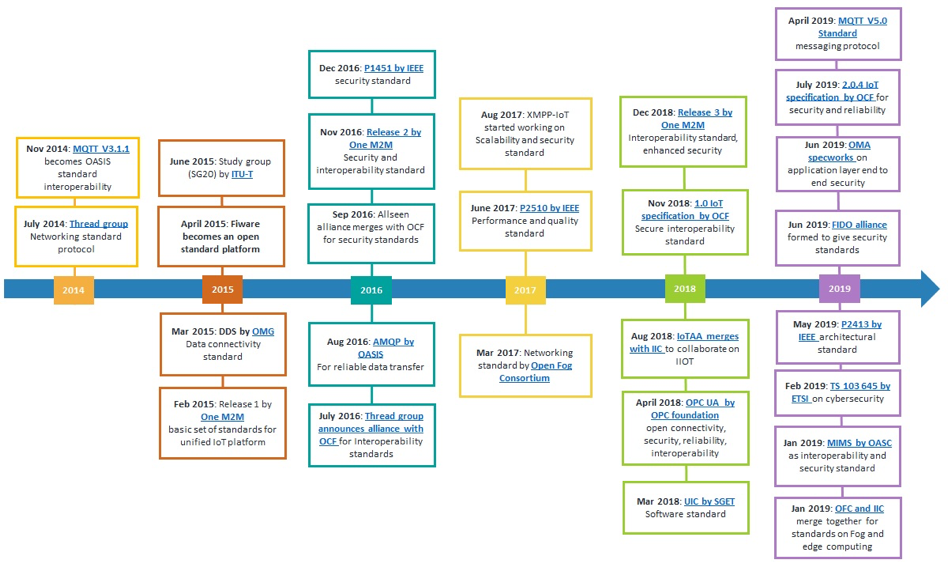