An Introduction to URLLC for 5G-NR: Ultra Reliability

An Introduction to URLLC for 5G-NR: Ultra Reliability

[This article is part 1 of two-part series of articles on URLLC focusses on 5G technologies related to Ultra reliability. Part 2 covers Low latency will be the next article coming up]

To meet the requirements of a high data rate with very quick and errorless response 5G has come with new and improved technologies from its previous generations. It is not only supposed to provide a high data rate (Gbps) but also provides very low latency (one millisecond). 5G will completely transform the world of communication from what it is now.

5G technology has three major components which are:

mMTC stands for massive machine-type communications that involve connectivity of millions of devices to each other in a network with IoT.

We will discuss the URLLC part of 5G-NR, different components technologies and how they work to meet the objectives of URLLC.

Ultra-Reliability: There is no meaning of communication if the information is not sent properly.  The reliability we have in 3G/4G is not sufficient to handle machine critical tasks, highly precise medical and industrial automation tasks. We nearly want errorless information reception and that’s where Ultra Reliability comes into the picture. Ultra-reliability ensures that information is received with very low packet loss (1 in billion packets). Ultra Reliability can be achieved using the following technologies-

LDPC Code: Wireless channel is noisy as well as lossy and whenever any transmission occurs through it, some bits may be received erroneously. This, in turn, forces us to use coding which helps us in correcting the errors. Turbo codes in the third and fourth generation (3G and 4G) will be replaced by low-density parity-check (LDPC) The primary reason for this transition is the high throughput requirement (in Gbps) for 5G systems.

HARQ Enhancements: Hybrid automatic repeat request is used for error detection and correction. In URLLC HARQ enhancement, instead of retransmitting the whole data packet, only the erroneous packet is resent by puncturing the current data packet to avoid the delay. 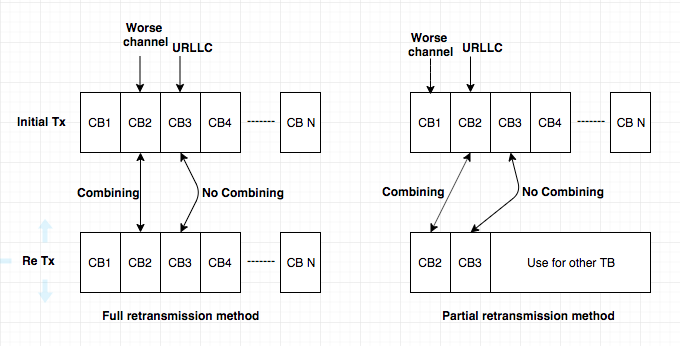 Massive MIMO: In Massive MIMO, the reliability of the system is increased using spatial diversity by sending the same data across different propagation paths. Multiple antennas (>10) are used to form a directional and focused beam (beamforming) towards a particular user to avoid interference which again increases reliability. The figure below shows multiple advantages of massive MIMO along with high reliability.