BlogNetwork Slicing: The 5G determiner with a big question mark

In 5G networks a single physical network is virtually separated into multiple radio access networks (RANs). Network slicing allows a network operator to provide dedicated virtual networks with functionality specific to the service or customer over a common network infrastructure. Thus it will be able to support the numerous and varied services envisaged in 5G.

Alternatively a single RAN might connect a number of services. This model allows 5G network operators to choose the characteristics needed for different capabilities such as connection density, spectrum efficiency and traffic capacity. 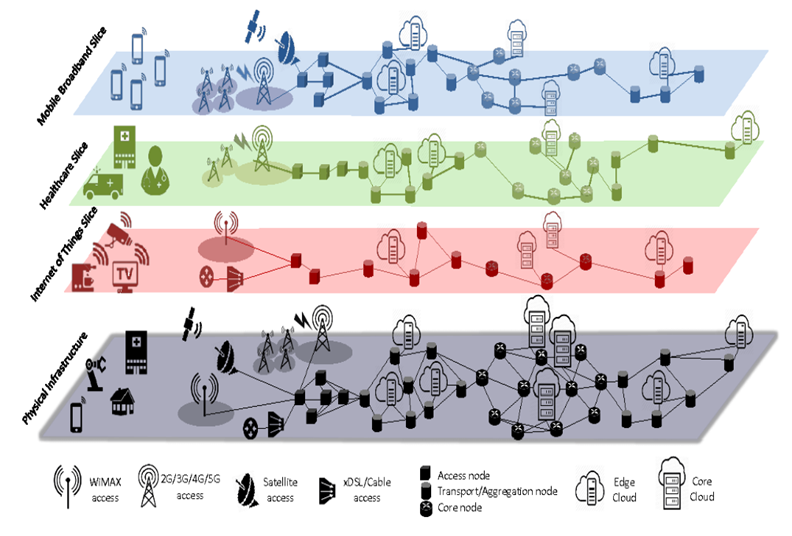 In 5G network slice the administrators map existing segmentation techniques such as VLAN’s and VRF’s to 5G interface slices to create segmentation schemes. This technique would require extensive provisioning, and result in large numbers of routing table entries and ACL’s.

There are two big questions:

Second, how will be the architecture now?  Are they going to re-architect their networks to give enterprise customers control over their assets?  Will the security and integrity of their infrastructure be maintained with this new architecture?

Telecom operators rely on a low-level division of computing resources called network functions virtualization (NFV), which is managed at a level much closer to the core of the computing infrastructure. 5G Wireless requires additional sources of revenue besides voice telephony, for service providers to be able to afford the transition, and sustain the new platform over the next decade. So some computing service is a critical need for them.

Yet they come into this new market with one unmistakable advantage: Extensive data center assets that span the planet. The appeal of 5G for telcos lies with the ability to pool their resources in the delivery of cloud-like services to commercial customers, without having to build hyperscale data centers

At the infrastructural level the telecom operator’s data centers are not even close in terms of similarity to the cloud platforms like OpenStack or Azure Stack. At a higher level, telcos moving to 5G may resell chunks of their cloud capacity to commercial customers. So they would be following Amazon’s original model of reselling the capacity it wouldn’t be using in its data centers, to outside customers.

Network slicing as per 3GPP

This 3GPP diagram is an example of three different configurations a network slice may assume, under the architecture adopted in 2018 for 3GPP Release 15 (the initial components of 5G). The 3GPP configures just the VNFs necessary to establish a data connection between server and client. Collectively, these VNFs provide the network access, security, and policy control functions needed for the user application represented by the slice to interface with the wireless network stack. In certain cases where one user may be running more than one application, certain VNFs can be shared, which is what’s happening here when part of Slice #1 merges with Slice #2.

One such concept which is called horizontal slicing where each slice has only the functions necessary to run the application (the “user function”), and its VNFs interface with the network. In other words, it doesn’t hand over control of the network, or some part of the network, to a user function.

Theoretically, the wireless service provider could apportion a network slice to a customer for use as the hub controller for these devices, so that their control plane would be very close to where their data will be initially gathered together and processed. Adopting the 3GPP plan could mean opening up the cloud services market to many smaller players.

But what if the customer wants to go one step further: Controlling the wireless fabric for its manufacturing plant, not just the applications running on it? For that capability, it would require a vertical slice — a division of resources that takes into account everything a wireless network requires to be a wireless network. It would give a major customer a way to leverage wireless spectrum as the fabric of its data center, administering wireless connections just like it would administer wired ones. Big enterprises don’t see why, the moment they have to take to the air, they should go through a middleman.