Back to LCD Technology

Samsung Electronics, a global leader in consumer electronics, semiconductor, telecommunication, digital media and digital convergence technologies, is the world’s largest technology company based on revenue and one of the world’s top 20 brands. For more than 70 years, Samsung has been at the forefront of innovation. Their discoveries, inventions and breakthrough products have helped shape the history of the digital revolution.

The largest technology company in the world (based on annual sales), Samsung is guided by a simple philosophy, strong values and high ethical standards that influence our work. Samsung is composed of numerous international businesses, all united under the Samsung brand, including Samsung Electronics, Samsung Heavy Industries, one of the world’s largest shipbuilders, and Samsung Engineering & Construction, a major global construction company. These three multinationals form the core of Samsung Group and reflect its name - the meaning of the Korean word Samsung is "tristar" or "three stars". Samsung has 40 subsidiaries and offices in over 100 countries. In 2010, Samsung announced innovative products including 3D TVs, Galaxy S smartphones, and the Galaxy Tab. 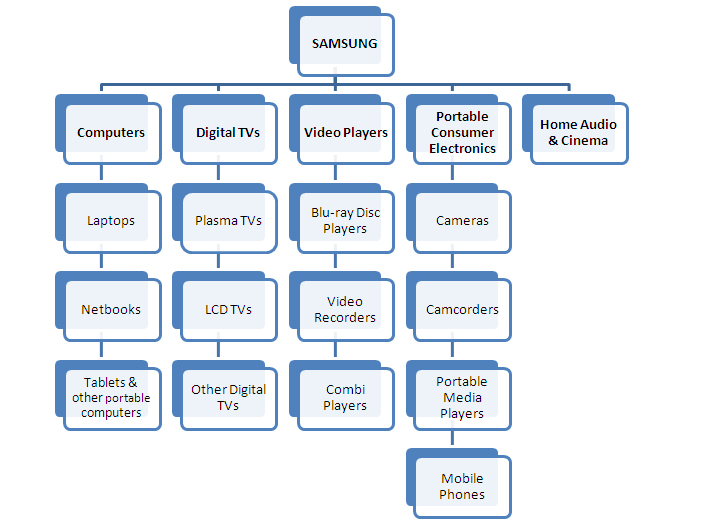 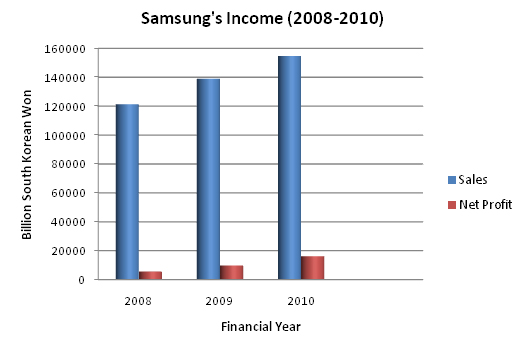 Although the company had a strong year in terms of revenue and income growth, Q4 results brought signs of a possibly difficult 2011.

Samsung’s digital media division, the unit in charge of the TV business, lost Won170 billion in Q4 2010, despite positive volume demand dynamics. Falling revenues and waning profits were largely due to declining prices brought on by intense price competition in LCD televisions. Strong demand for LED screens in the first half of 2010 drove up prices, leading to an oversupply in the second half, causing global prices to decline. In televisions, LED screens became mainstream over 2010, thus declining in price. Product lifecycle extensions like 3D TVs and internet-enabled TVs were non-factors in revenue generation in 2010. Demand for 3D TVs was limited, and internet-enabled TVs were just entering the market in late 2010.

Samsung Corp was much more successful in smartphones and related components. The telecommunications division had a record Won1.4 trillion operating profit in Q4 2010. This is largely due to the success of the Galaxy S series of Android-based smartphones. The company reports global sales of approximately 10 million units in 2010. However, significant challenges lie ahead as competitors like HTC Corp, Motorola Inc and LG Corp are focusing on Android-based phones to boost growth in 2011, making it likely that the market will be significantly more competitive with falling prices and margins.

Samsung Corp is the world’s largest manufacturer of NAND flash memory, demand for which surged towards the end of 2010 as the component is widely used in smartphones and portable computers, pushing up operating semiconductor profits to Won1.8 billion in 2010. 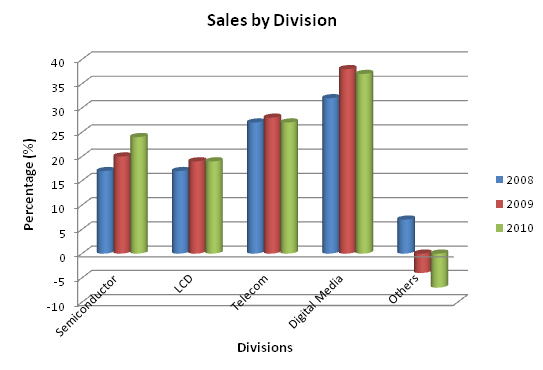 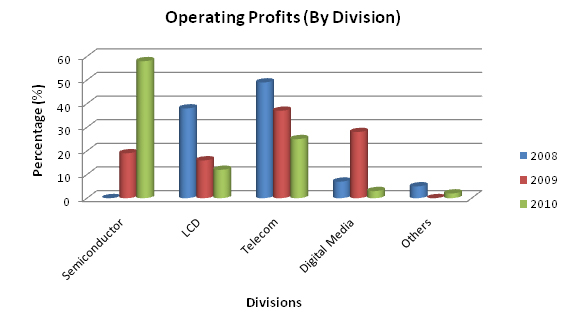 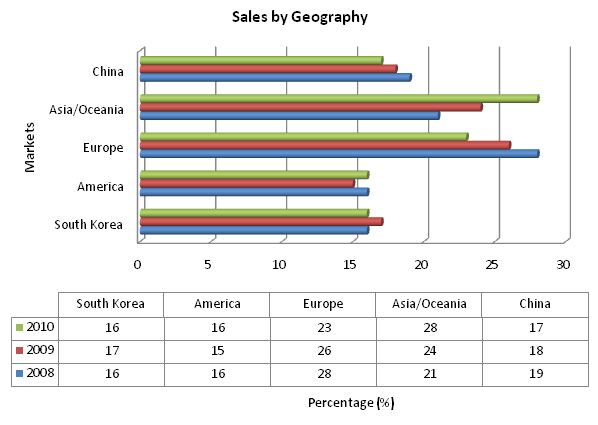 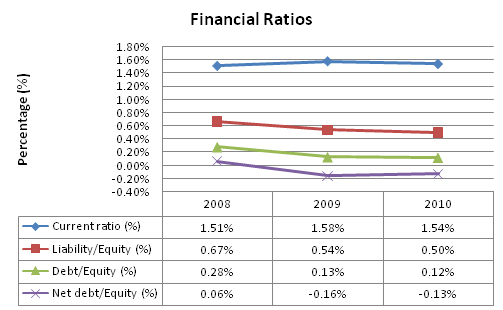 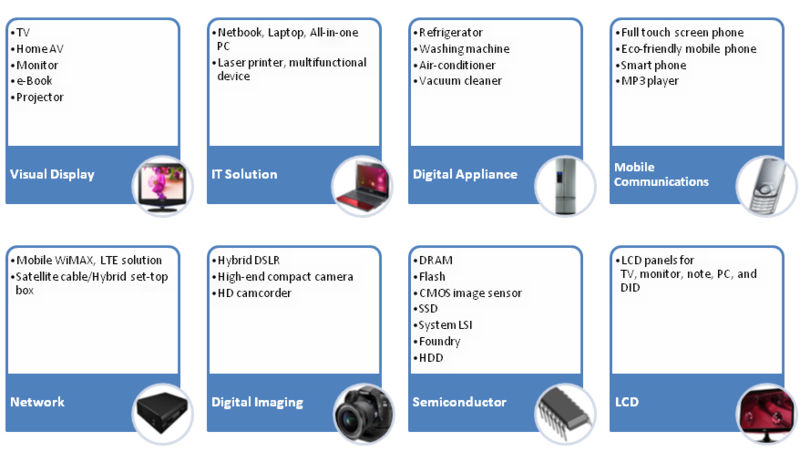 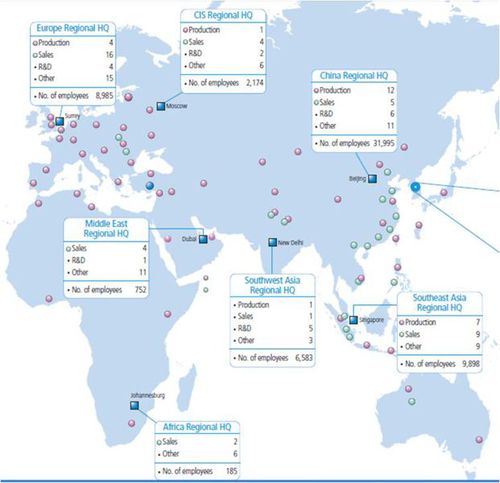 Supported by vital technologies and inimitable design, Samsung Electronics has achieved the world’s No.1 market share in TVs for five years in a row since 2006. After establishing the new market for LED TVs in 2009, they have extended their competitive lead with sales of 45.11 million TVs, which includes 39.26 million flat panel TVs in 2010. Samsung launched Full HD 3D LED TV in 2010. With sales of 2 million 3D TVs, they are also leading the next-generation market. In 2011, they are launching smart TVs that feature Full HD picture quality, immersive viewing experience and Smart Hub options that make digital content more convenient and enjoyable for consumers. 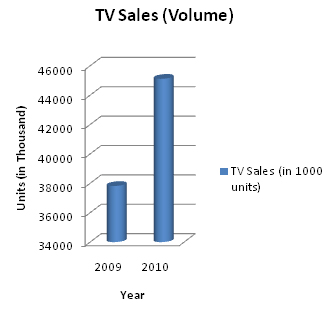 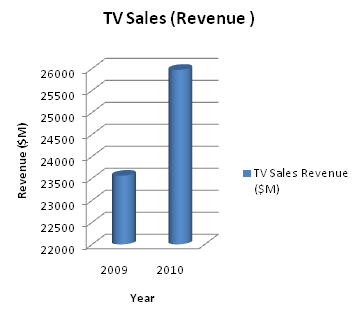 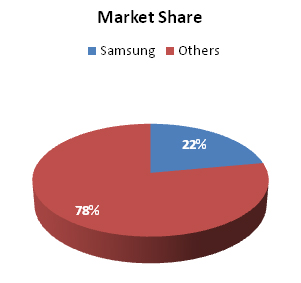 By implementing global marketing strategy for mobile PCs, Samsung Electronics realized rapid growth in 2010, reaching sales of 10 million units worldwide. Samsung launched a printer for consumers that supports mobile printing. They provided business customers with a complete product line, including the first dual core CPU-equipped printer on the market, a multifunction printer and an A3 copier. Easy-to-use features and powerful performance secured second global market share in the A4 laser printer category. Samsung led the world market in the categories of mono laser multifunction printers and color laser multifunction printers for the second consecutive year. 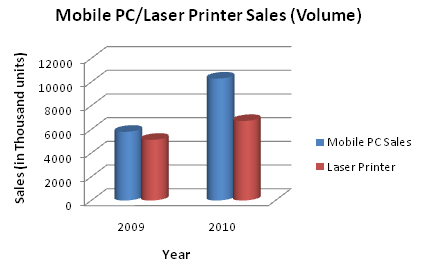 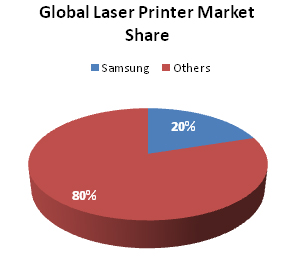 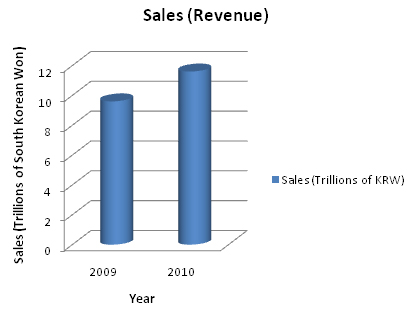 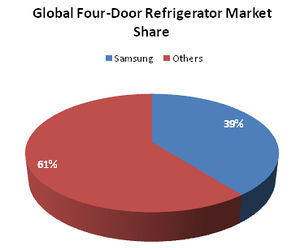 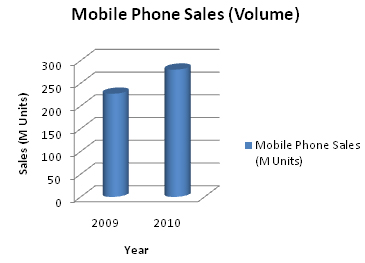 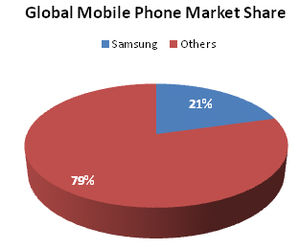 Advancing the rapidly growing market of next-generation wireless telecommunications systems, Samsung Electronics is setting standards by developing forward-looking products for two major 4G platforms, Long Term Evolution (LTE) and Mobile WiMAX (WiBRO). In 2010, Samsung established the first LTE commercial services network in the US and is now expanding in North America, Asia and Europe. Mobile WiMAX—introduced by Samsung Electronics and adopted as a global standard in 2007—has been experiencing dramatic growth in major mobile communications markets, including the US, Japan and Saudi Arabia. 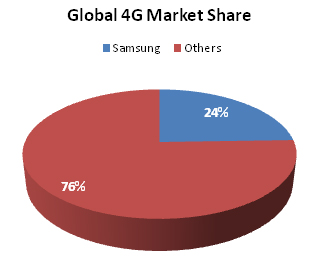 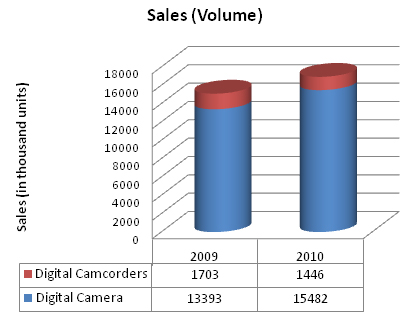 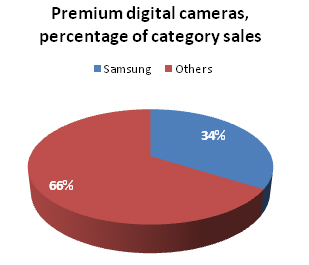 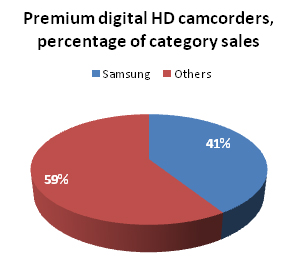 The industry leader, Samsung Electronics has achieved the No. 1 market share for LCD panels for nine consecutive years owing to our exceptional technology and product quality. Samsung’s industry-first Active 3D technology supports True 240Hz for 3D TV, which has reinforced its leadership. Samsung also released such trendsetting displays as an LCD panel for the tablet PC, which offers vivid colors at a wide viewing angle; a low-power IT panel built with advanced LED backlight technology; an exceptionally narrow bezel DID panel; and more. In 2011, it plans to improve its product leadership by developing, ultra-large panel technology, a full range of LED LCD panels, high-value IT products and DID panels. 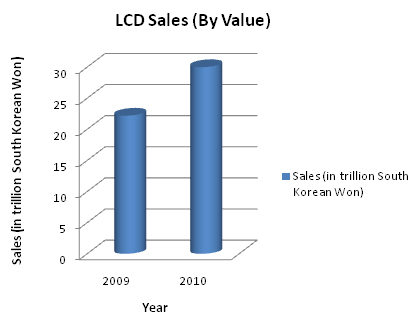 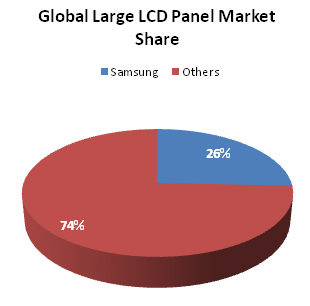 2. Patents - Samsung has many technology patents that gives it an edge over other companies

4. Core competencies in some of the businesses that Samsung is into:

6. Supply Chain - One of the main characteristics of being a market leader is the speed to market of its products. Samsung Electronics has excelled in that regard by leveraging its manufacturing superiority and expertise in supply chain process

Back to LCD Technology