The complete or partial detachment of ligaments, tendons and/or other soft tissues from their associated bones within the body are relatively commonplace injuries, particularly among athletes. Such injuries are generally the result of excessive stresses being placed on these tissues. By way of example, tissue detachment may occur as the result of an accident such as a fall, over-exertion during a work-related activity, during the course of an athletic event, or in any one of many other situations and/or activities.

In the case of a partial detachment, the injury will frequently heal itself, if given sufficient time and if care is taken not to expose the injury to further undue stress. In the case of complete detachment, however, surgery may be needed to re-attach the soft tissue to its associated bone or bones.

The history of sutures begins more than 2,000 years ago with the first records of eyed needles. The Indian plastic surgeon, Susruta (AD c380-c450), described suture material made from flax, hemp, and hair. At that time, the jaws of the black ant were used as surgical clips in bowel surgery. In 30 AD, the Roman Celsus again described the use of sutures and clips, and Galen further described the use of silk and catgut in 150 AD. Before the end of the first millennium, Avicenna described monofilament with his use of pig bristles in infected wounds. Surgical and suture technique evolved in the late 1800s with the development of sterilization procedures. Finally, modern methods created uniformly sized sutures.

Catgut and silk are natural materials that were the mainstay of suturing products, and they remain in use today. The first synthetics were developed in the 1950s, and further advancements have led to the creation of various forms. The different types of sutures offer different qualities in terms of handling, knot security, and strength for different purposes. No single suture offers all of the ideal characteristics that one would wish for. Often the trade-off is in tissue handling versus longevity versus healing properties.

Arthroscopic techniques for stabilization of the shoulder have continued to evolve over the past decade. 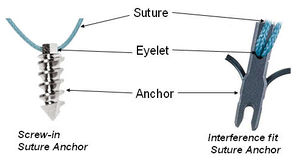 Bone anchors or suture anchors are devices which attach soft tissue to bone. This may be achieved by tieing one end of a suture to soft tissue and the other end to a device which "anchors" the suture to the bone. source

Suture Anchors are very useful fixation devices for fixing tendons and ligaments to bone. They are made up of:

Suture anchors are small devices placed in bone that have attached sutures or other materials that can be used for repair of soft tissues structures. They are most commonly used in the shoulder and knee regions for reattaching ligaments and tendons. There are several different designs including screws and metal posts with attached barbs. source 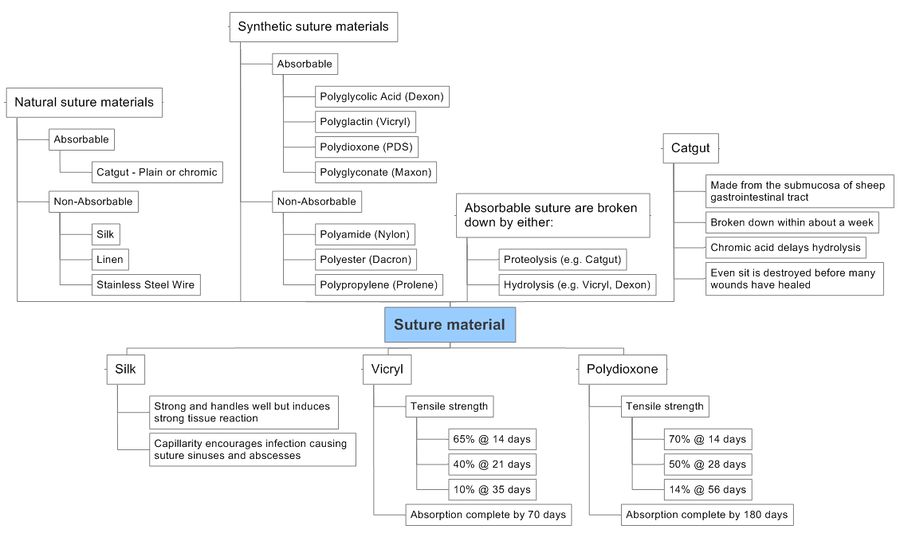 The ideal suture has the following characteristics:

Unfortunately, at the present time, no single material can provide all of these characteristics. In different situations and with differences in tissue composition throughout the body, the requirements for adequate wound closure require different suture characteristics.source

All sutures should be manufactured to assure several fundamental characteristics, as follows:

Insert the needle at a 90° angle to the skin within 1-2 mm of the wound edge and in the superficial layer. The needle should exit through the opposite side equidistant to the wound edge and directly opposite the initial insertion. Oppose equal amounts of tissue on each side. A surgeon's knot helps place the nonabsorbable suture. Strive to evert the edges and avoid tension on the skin, while approximating the wound edges. Place all knots on the same side.

This suture method entails similar technique to the simple suture without a knotted completion after each throw. Precision penetration and tissue opposition is required. The speed of this technique is its hallmark; however, it is associated with excess tension and strangulation at the suture line if too tight, which leads to compromised blood flow to the skin edges. Another variant is the simple locked running suture, which has the same advantages and similar risks. The locked variant allows for greater accuracy in skin alignment. Both styles are easy to remove. Additionally, the running sutures are more watertight.

Vertical mattress sutures can aid in everting the skin edges. Employ this technique also for attachments to a fascial layer. The needle penetrates at 90° to the skin surface near the wound edge and can be placed in deeper layers, either through the dermal or subdermal layers. Exit the needle through the opposite wound edge at the same level, and then turn it to repenetrate that same edge but at a greater distance from the wound edge. The final exit is through the opposing skin edge, again at a greater distance from the wound edge than the original needle entrance site. Place the knot at the surface. A knot placed under tension risks a stitch mark.

The horizontal mattress can be used to oppose skin of different thickness. With this stitch, the entrance and exit sites for the needle are at the same distance from the wound edge. Half-buried mattress sutures are useful at corners. On one side, an intradermal component exists, in which the surface is not penetrated. Place the knot at the skin surface on the opposing edge of the wound.

Sutures can be placed intradermally in either a simple or running fashion. Place the needle horizontally in the dermis, 1-2 mm from the wound edge. Do not pass the needle through the skin surface. The knot is buried in the simple suture, and the technique allows for minimization of tension on the wound edge. In a continuous subcuticular stitch, the suture ends can be taped to the skin surface without knotting.

Bone tunnels with either suture fixation, or interference screw fixation

Other information on suture 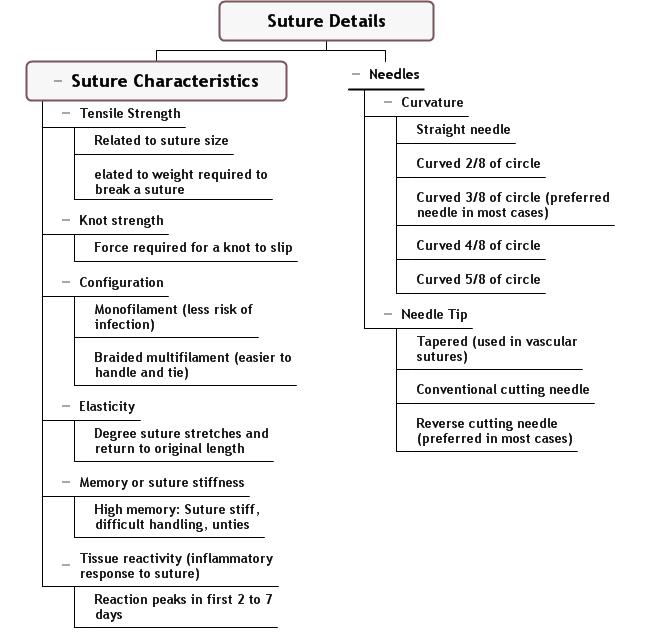 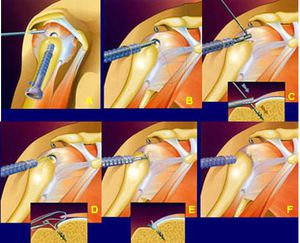 Number of patients by geography

Number of patients by procedure

Overview information on the patents in these areas 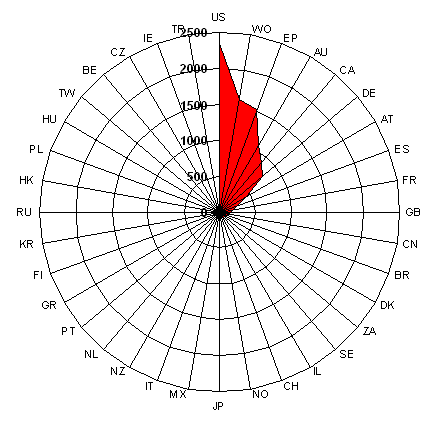 The IP activity initiated during early 70s, and a continuous increase in the IP activity evident thereafter, with maximum activity during the year 2004.

Assignees with more than 15 records are considered as major players. 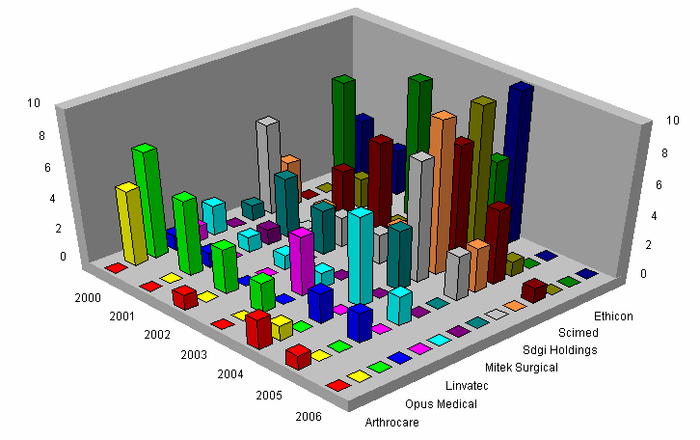 Components of anchors and features - An interactive model 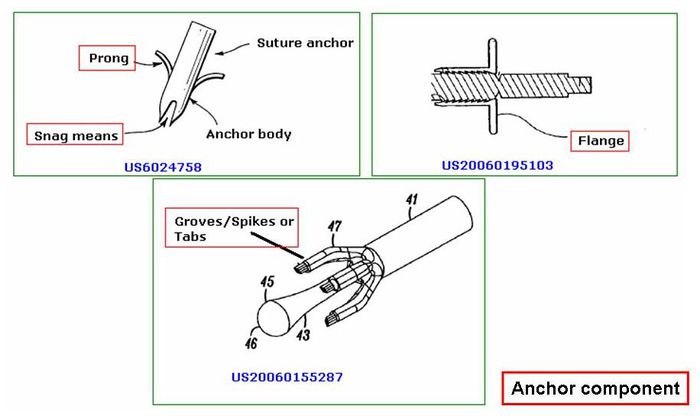 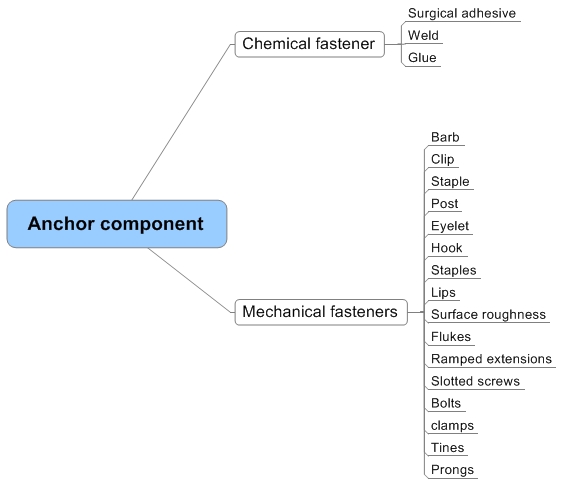 Competitors in these areas

Anchors can be catagorized as: 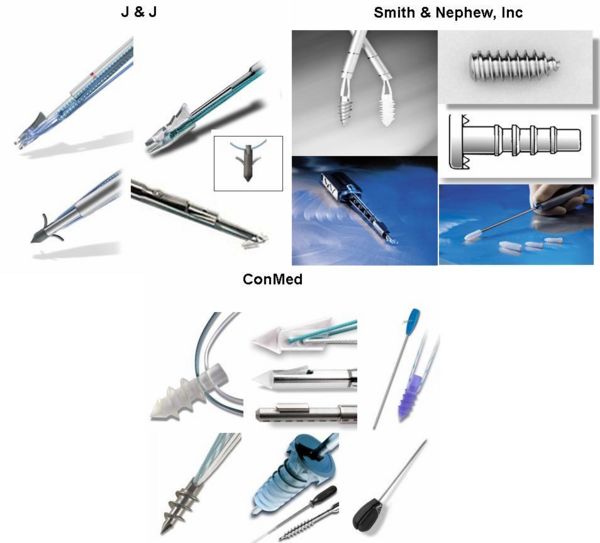