This report presents a brief introduction to wind energy and technologies available for horizontal wind turbines. A detailed taxonomy for horizontal axis wind turbines is presented covering parts of the turbine, control systems, applications among others. A detailed landscape analysis of patent and non-patent literature is done with a focus on Doubly-fed Induction Generators (DFIG) used in the horizontal axis wind turbines for efficient power generation. The product information of major players in the market is also captured for Doubly-fed Induction Generators. The final section of the report covers the existing and future market predictions for wind energy-based power generation. 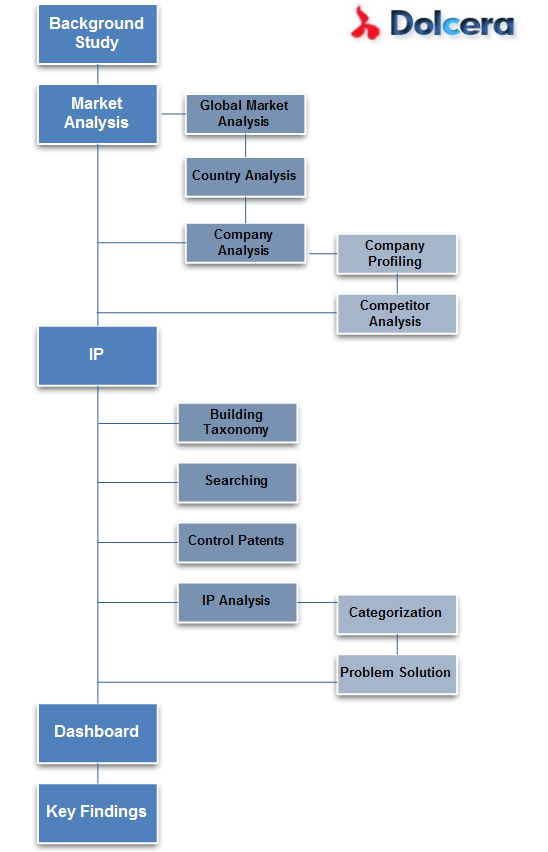 In order to overcome the problems associated with fixed speed wind turbine system and to maximize the wind energy capture, many new wind farms are employing variable speed wind energy conversion systems (WECS) with doubly-fed induction generator (DFIG). It is the most popular and widely used scheme for the wind generators due to its advantages.

For variable-speed systems with limited variable-speed range, e.g. ±30% of synchronous speed, the doubly-fed induction generator(DFIG) can be an interesting solution. This is mainly due to the fact that the power electronic converter only has to handle a fraction (20-30%) of the total power as the converters are connected to the rotor and not to the stator. Therefore, the losses in the power electronic converter can be reduced, compared to a system where the converter has to handle the total power. The overall structure of wind power generation through DFIG as shown in the figure below.

The History of Wind Energy

To read about the History of Wind Energy, click here 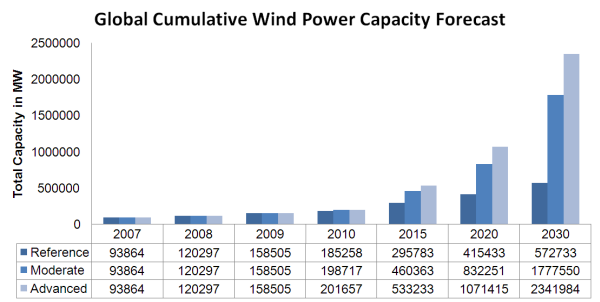 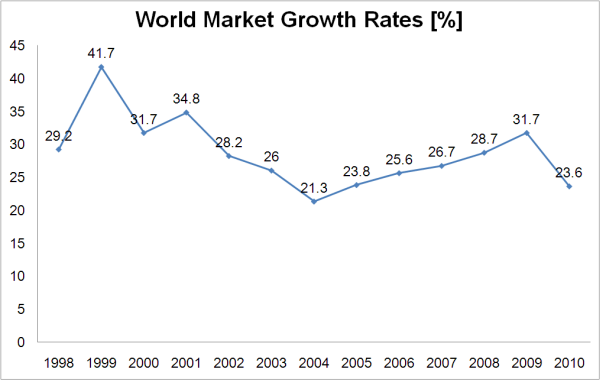 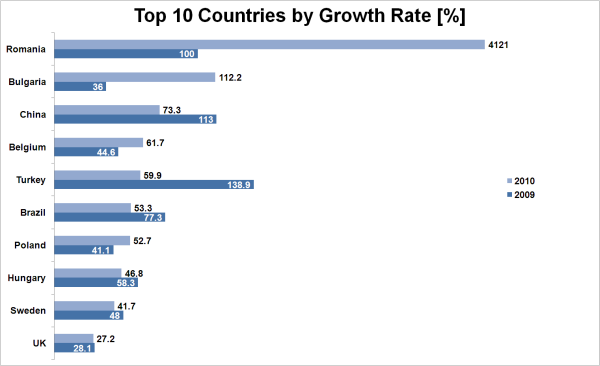 The regional breakdowns for the period 2009-2030 has been provided for the following three scenarios:

Note: To know more about the Forecast Scenarios click here

The top 10 countries by Total Installed Capacity for the year 2010, is illustrated in the chart below: 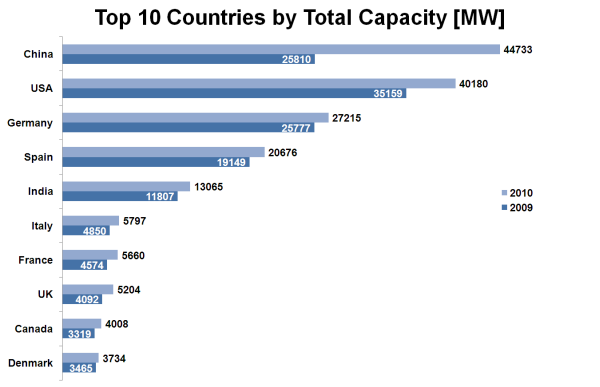 To view the Top 10 countries by different other parameters for the year 2010, click on the links below:

Wind Energy Outlook for China - 2011 & Beyond
Despite its rapid and seemingly unhampered expansion, the Chinese wind power sector continues to face significant challenges, including issues surrounding grid access and integration, reliability of turbines and a coherent strategy for developing China’s offshore wind resource. These issues will be prominent during discussions around the twelfth Five-Year Plan, which will be passed in March 2011. According to the draft plan, this is expected to reflect the Chinese government’s continuous and reinforced commitment to wind power development, with national wind energy targets of 90 GW for 2015 and 200 GW for 2020.

Wind Energy Main market developments in 2010
Today the Indian market is emerging as one of the major manufacturing hubs for wind turbines in Asia. Currently, seventeen manufacturers have an annual production capacity of 7,500 MW. According to the WISE, the annual wind turbine manufacturing capacity in India is likely to exceed 17,000 MW by 2013.
The Indian market is expanding with the leading wind companies like Suzlon, Vestas, Enercon, RRB Energy and GE now being joined by new entrants like Gamesa, Siemens, and WinWinD, all vying for a greater market share. Suzlon, however, is still the market leader with a market share of over 50%.
The Indian wind industry has not been significantly affected by the financial and economic crises. Even in the face of a global slowdown, the Indian annual wind power market has grown by almost 68%. However, it needs to be pointed out that the strong growth in 2010 might have been stimulated by developers taking advantage of the accelerated depreciation before this option is phased out.

The chart given below illustrates the Global Market Share Comparison of Major Wind Energy Companies for the period 2008-2010, as provided by two different agencies, Make Consulting and BTM Consulting:

The present study on the IP activity in the area of horizontal axis wind turbines with focus on Doubly-fed Induction Generator (DFIG) is based on a search conducted on Thomson Innovation.

A sample of 139 patents from the search is analyzed based on the taxonomy. Provided a link below for sample spread sheet analysis for doubly-fed induction generators. 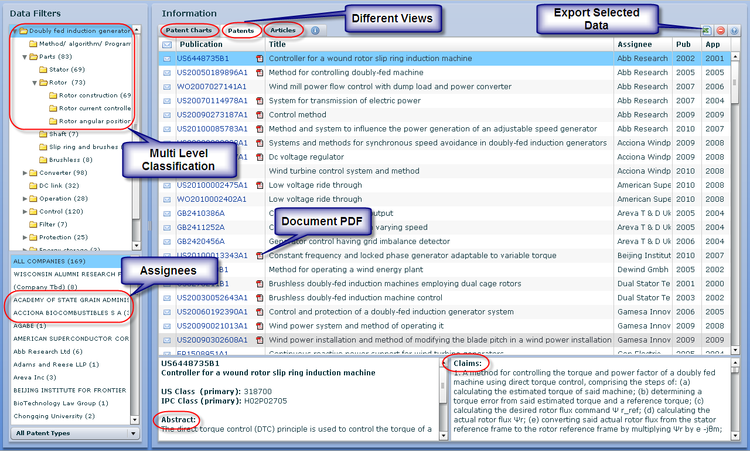 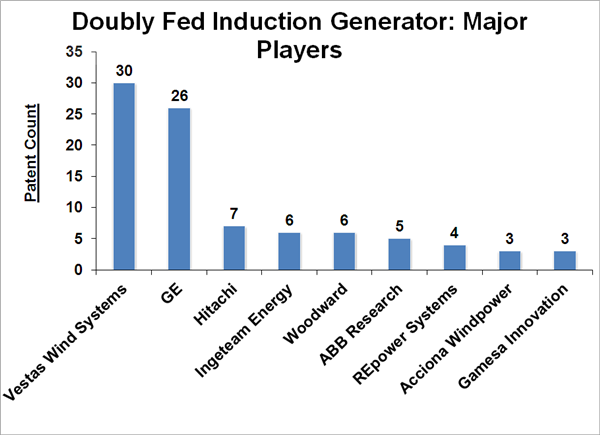 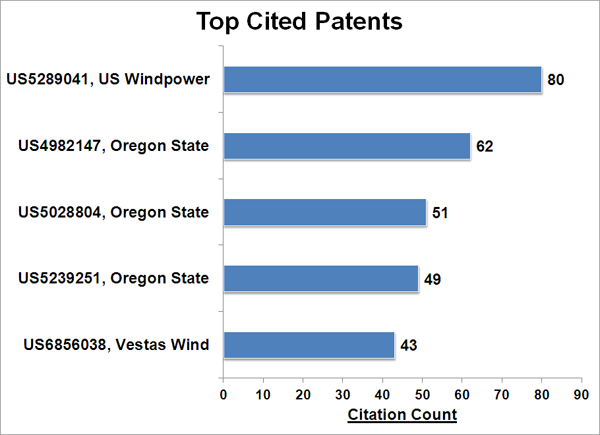 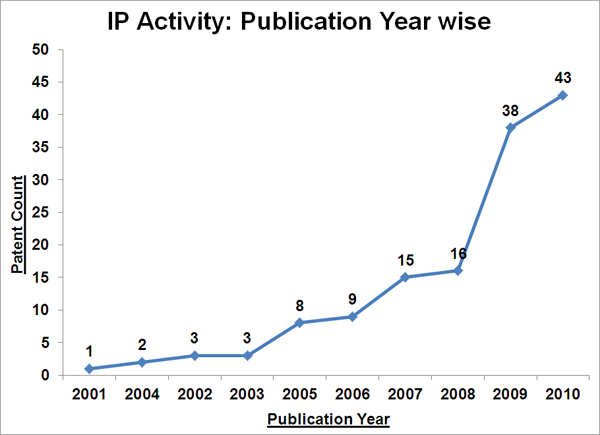 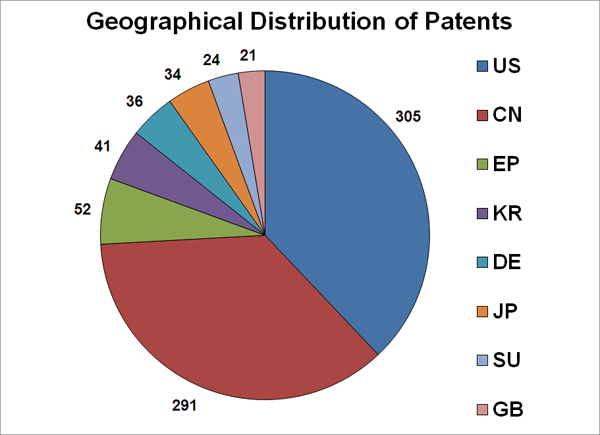 Issues in the Technology