The Market Research on "Sports & Energy Drinks Market in Australia" was carried out with the following objectives:

The following dashboard provides with a detailed Market Overview of the Sports & Drinks Market in Australia: 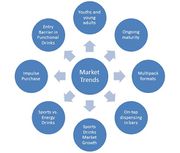 The Australian Beverages Council represents over 95% of the non-alcoholic beverage industry in Australia comprising large, medium and small members from across the country. Members of the Beverages Council that manufacture or distribute energy drinks¸ representing 99% of the market’s production volume have all committed to a range of best practice standards over and above legislative requirements. As energy drinks are developed for a mature consumer, all members commit to the following guidelines which relate to the manufacture, distribution and marketing of energy drinks:

The following dashboard illustrates the Product Comparison of all the major Energy Drinks Products present globally:

Note: The above dashboard is not exhaustive in terms of number of products.