Difference between revisions of "Pinene: An off flavor in mango juice" 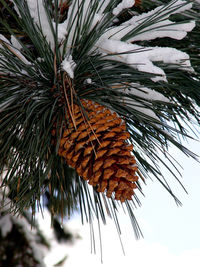 The primary objective of this review was to compile experimental information and relevant literature to help researches working in the area of pinene removal, an off flavor, form mango juice.

The chemical compound pinene is a bicyclic terpene known as a monoterpene. There are two structural isomers found in nature: α-pinene and β-pinene. As the name suggests, both forms are important constituents of pine resin; they are also found in the resins of many other conifers, and more widely in other plants. Both are also used by many insects in their chemical communication system. e-soruce 1

Alpha –Pinene (α-pinene) is an organic compound of the terpene class, one of two isomers of pinene. It is an alkene and it contains a reactive four-membered ring. It is found in the oils of many species of many coniferous trees, notably the pine. It is also found in the essential oil of rosemary (Rosmarinus officinalis). Both enantiomers (shown below) are known in nature; 1S, 5S- or (−)-α-pinene is more common in European pines, whereas the 1R,5R- or (+)-α-isomer is more common in North America. The racemic mixture is present in some oils such as eucalyptus oil. e-source 2 In Brazil alone, the pine resin tapping activity is increasingly important, producing resin mostly for export; 100,000.00 tons were produced in 2002, a market that moved some US$ 25 millions, providing over 12,000.00 direct jobs in the countryside. Limberger et al., 2007 & e-source 3 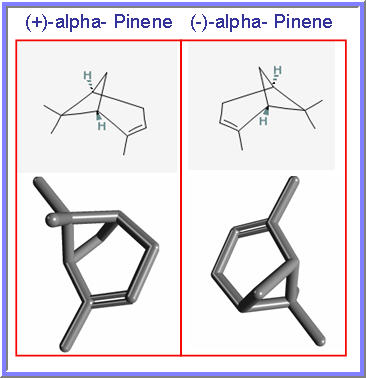 Beta-Pinene (β-pinene) is a colorless liquid, soluble in alcohol, but not water. It has a woody-green pine-like smell. It occurs naturally in rosemary, parsley, dill, basil, yarrow, and rose. Both enantiomers (+)-beta- Pinene and (-)-beta- Pinene are shown below. e-source 4 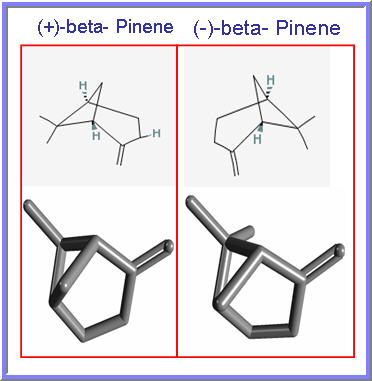 Important properties of pinene in juices 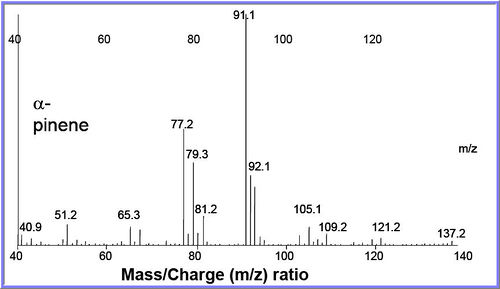 Step 1: Formation of GPP from Acetyl-CoA

The mevalonate pathway or HMG-CoA reductase pathway or mevalonate-dependent (MAD) route or isoprenoid pathway, is an important cellular metabolic pathway present in all higher eukaryotes and many bacteria. It is important for the production of dimethylallyl pyrophosphate (DMAPP) and isopentenyl pyrophosphate (IPP), which serve as the basis for the biosynthesis of molecules used in processes as diverse as terpenoid synthesis. (Figure below e-source 5 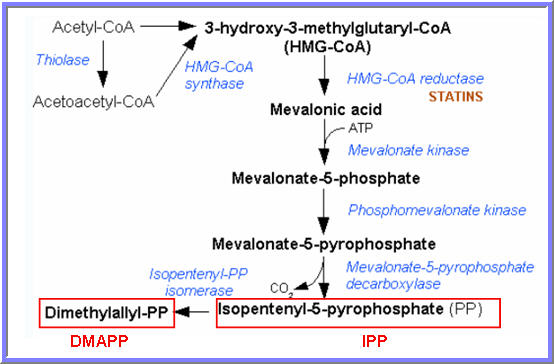 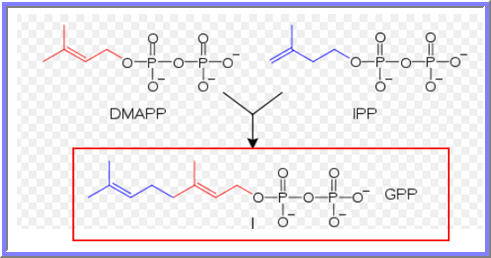 Synthesis of GPP from DMAPP and IPP. e-source 6

Step 2: Synthesis of pinene from GPP

α-Pinene and β-pinene are both produced from geranyl pyrophosphate, via cyclisation of linaloyl pyrophosphate followed by loss of a proton from the carbocation equivalent. e-source

Synthesis of pinene from GPP. e-source

The soluble enzyme preparations from tissue of Saluia officinalis leaves were shown to catalyze the divalent cation dependent cyclization of the acyclic C10 precursor [l-3H] GPP1 to (+/-)-7- H] α -pinene and (-)-[7-3H] β – pinene. The co-occurrence in the same species of the (+)- and (-)- modification is fairly common among the cyclic monoterpenes but rare among the higher terpenes, and it is generally assumed that such enantiomers are synthesized independently via stereochemically distinct routes. 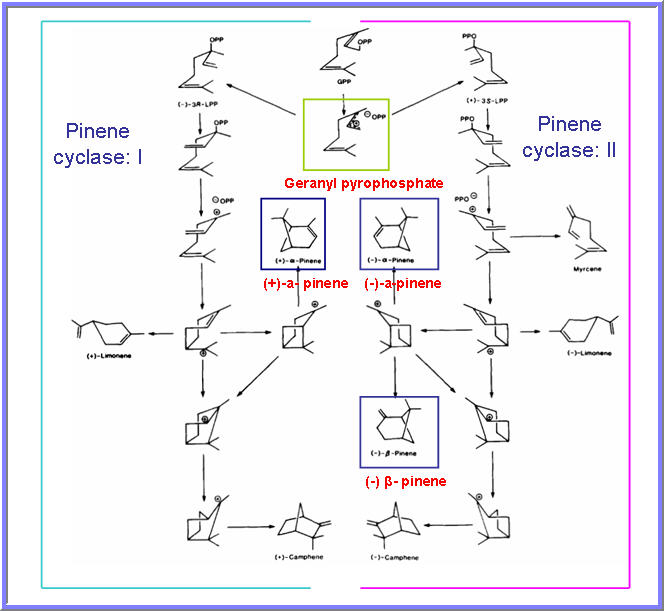 Effect of ripening and temperature on pinene synthesis in mangoes

The concentrations of all four of the terpene volatiles including alpha-pinene were influenced by initial ripeness stage, with mature-green (MG) fruit from all atmosphere treatments stored at 12 °C having lower concentrations than did tree-ripe (TR) mangoes stored at the same temperature (figure below). However, there was no significant temperature effect on the levels of the terpene volatile, alpha-pinene, for TR mangoes stored at 8 or 12 °C. This shows that the concentration of pinene in mangoes remains nearly unaffected with change in temperature from 8 deg C to 12 deg C but increase significantly with ripening of fruit. Bender and Brecht, 2000

Effect of ripening and temperature on pinene synthesis in mangoes. Bender and Brecht, 2000

Isolation and analysis of pinene

Aroma active peaks with tentative identification based on aroma attributes and retention characteristics for grapefruit juice samples as detected by GC-O on polar and non-polar columns for pinene is shown in the figure below. 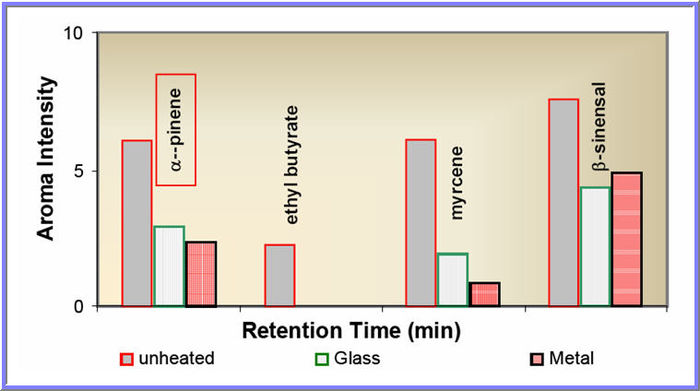 Chemical and physical properties of pinene

Some of the patents involving synthesis of pinene or compounds from pinene are shown below.

Pinene, a monoterpene is known to exist as an off flavor in mango juice. Pinene exists in two structural isomers in nature, α-pinene and β-pinene. Biologically, synthesis of pinene can be summarized in two steps. In step one, acetyl CoA results in formation of dimethylallyl pyrophosphate (DMAPP) and isopentenyl pyrophosphate (IPP) via HMG CoA reductase pathway. Further, DMAPP and IPP combines to form Geranyl pyrophosphate (GPP). In step two, GPP undegoes cyclization to give pinene. Pinene cyclase I and II are the two enzymes responsible for conversion of GPP to (+)-a-pinene and (-)-a-pinene, (-) β- pinene, respectively. Production of pinene was found to be increased in mangoes as the ripen during fruit maturation. Change in temperature from 8 deg C to 12 deg C was shown to have no significant impact on pinene production in mangoes. On the other hand, aroma intensity of pinene was found to be more in unheated samples than heated samples. From these studies it can be hypothesized that to curtail the formation of pinene, an off flavor in mango juice, it is important to consider the ripening stage of fruit. Since, there was no significant change in pinene concentration with increase in temperature, heat treatment can prove helpful in decreasing the aroma intensity of pinene in mango juice. The review has further covered isolation and analysis of pinene by GC/MS and GC-O lab techniques, from mango and grape fruits sufficiently. A comprehensive information table on various important chemical and physical properties of pinene has been presented. The IP activity in the field of pinene synthesis and application of pinene for synthesis of several other compounds have also been summarized towards the end.